Differences between Version 7 and Version 8

Are you ready to upgrade from Version 7 to Version 8 (or even Version 9)? It depends! Be sure to read through this article beforehand so that you'll know what to expect. We highly recommend updating all of the computers in your office at once for the best experience.

Yes, they will still communicate with each other! While Version 7 and Version 8 clients are largely compatible with one another, one problem you may experience with Version 7 clients are discrepancies with update times. Instead of aging correctly, Version 7 clients will reset the aging time and color each time an active Light is updated.

Keep in mind that Version 7 is still fully compatible with the latest Windows 10 updates and we continue to provide support for this version, so do not feel obligated to update to Version 8 or Version 9 if you are still enjoying the features of Version 7.

The Version 7 license cannot be used to license a Version 8 client; however, there are exceptions to this for users who have purchased lifetime licensing. The Version 8 update will function in a trial mode for a month. At that point, upgrade licensing will need to be purchased and a new registration key issued and entered, otherwise the Version 8 trial will expire after 30 days. Let us know who you are - we can look up whether or not the practice is eligible for a free upgrade, but this will depend upon the original purchase date.

There is no ability for BlueNote clients to export metrics. Version 7 Lights History and Daily History have been replaced with Daily Lights Activity, which is set to clear itself out every night by default. Version 8 metrics and logging will be handled in its own administrative module. This module is not yet available.

Daily Lights Activity has been streamlined, and each event can now be copied, then pasted elsewhere.

Any licensed Version 8 client can turn on and use BlueNote Remote, which activates a browser-based interface that allows users on any networked device to interact with up to 30 pre-selected active Lights, or to use their device as a remote control for one Light.

BlueNote Remote works on iPads, personal phones, Chromebooks, Kindle Fire tablets, and any other device that has a web browser and is connected by ethernet or wifi to a secure local network. 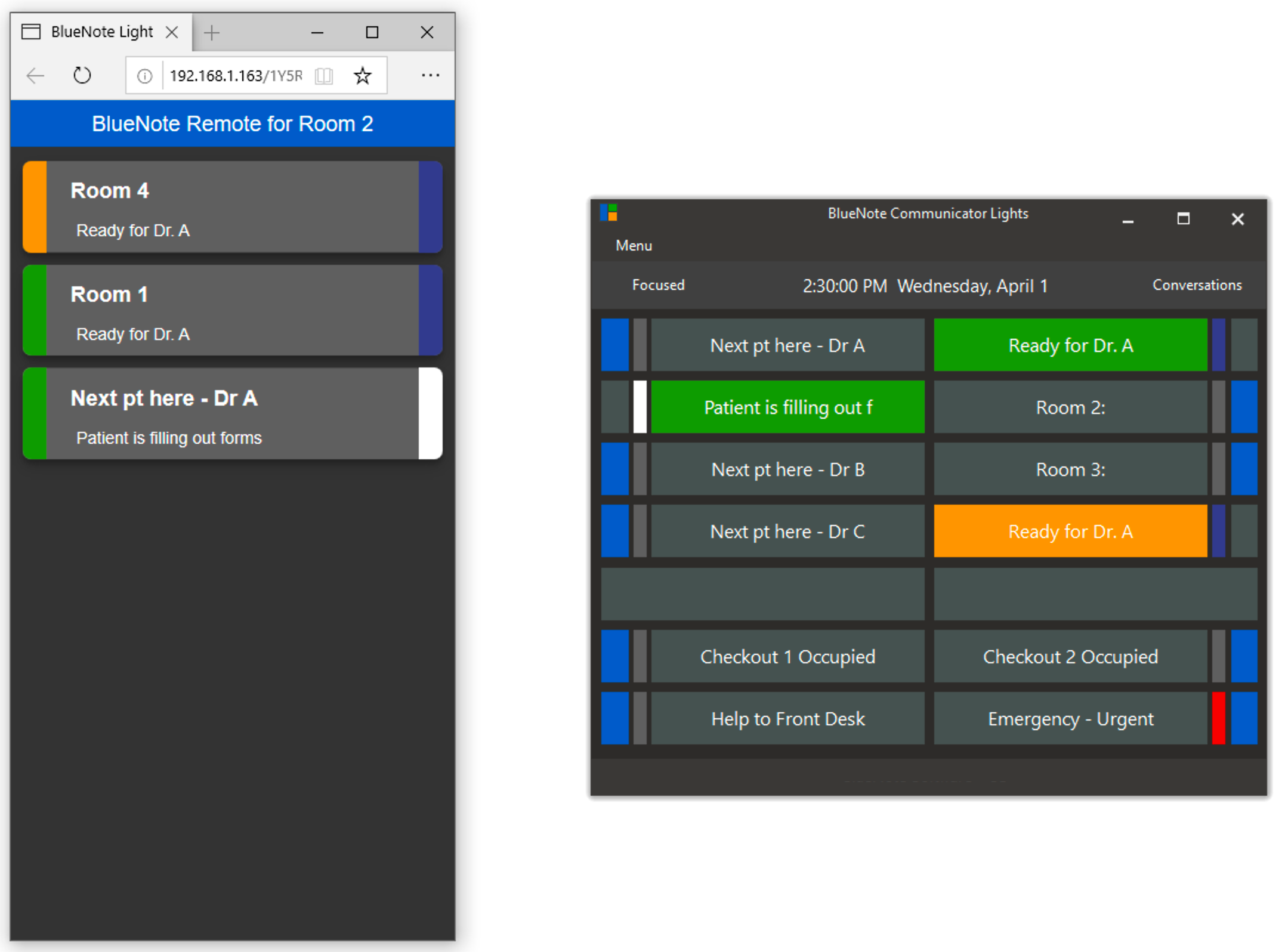 • Version 7 - all lights age the same. In Version 8, each Light can have its own aging time.

• P1, P2, P3 will now flash according to the first one set, and display as part of the Light when active.

• The Light Action window now appears within the Light Panel instead of in its own separate window.

• BlueNote colors cover the entire BlueNote instead of as a small color tag.

• The Light History of an Active light is now viewed by clicking on the room name instead of being posted as part of the main Light Action window. The Last Comment or BlueNote chosen will appear in the Comment section, with the prompt "click to type comment."  Watch the video clip below to view the new location of an active Light's history

• The Conversations button has been moved from the lower-left hand corner to the upper right-hand corner of the Light Panel view.

• The New and Updated buttons have been eliminated on the Light Panel. Popups should be set to clear in an hour instead of six minutes.

• When programmed, Status appears as an additional panel, since the original Status button has been replaced by Conversations.

• The two columns have been re-labeled as Selection 1 and Selection 2.

• Sequence has now been renamed Focused. Its option menu can only be chosen on the gear icon within the Focused view.

•The Options button has been eliminated and many programming features have been moved around and streamlined, most notably the Alert Manager, which has been moved to a Notifications tab.

• In System Wide Changes, Lights can now be dragged and dropped from one Light Panel to the other instead of within each panel. The difference is that this option is now found in the Advanced tab instead of the Light Panels tab.

• Each Light with BlueNotes has its own option for the BlueNote tone to be played before the Light tone.

• Lights can be programmed with a Tag (Patient, Client, or Occupied) that may allow users to add patient names to active Lights.

• We've also added over 80 new sounds, many of them animal sounds and spoken room tones. The Tone Library now contains over 300 unique ringtones.

Considering upgrading to Version 9 instead?

BlueNote Lights Version 8 was released in July, 2020, while Version 9 launched in October, 2021. Version 9 includes all of the changes above, as well as new options. Follow the Related Articles below to view the Version 9 feature additions.