How do I send a message to a specific person or computer?

Targeted notes are sent from the Conversations window.

The Users list will organize itself according to the BlueNote users currently online in alphabetical order. Messages cannot be sent to offline users, which will appear greyed-out at the bottom of the Conversations User list. Starting a conversation is like starting a new email thread, so that one or more selected users will be included, and receive all replies, when anyone in that thread adds another message to it. 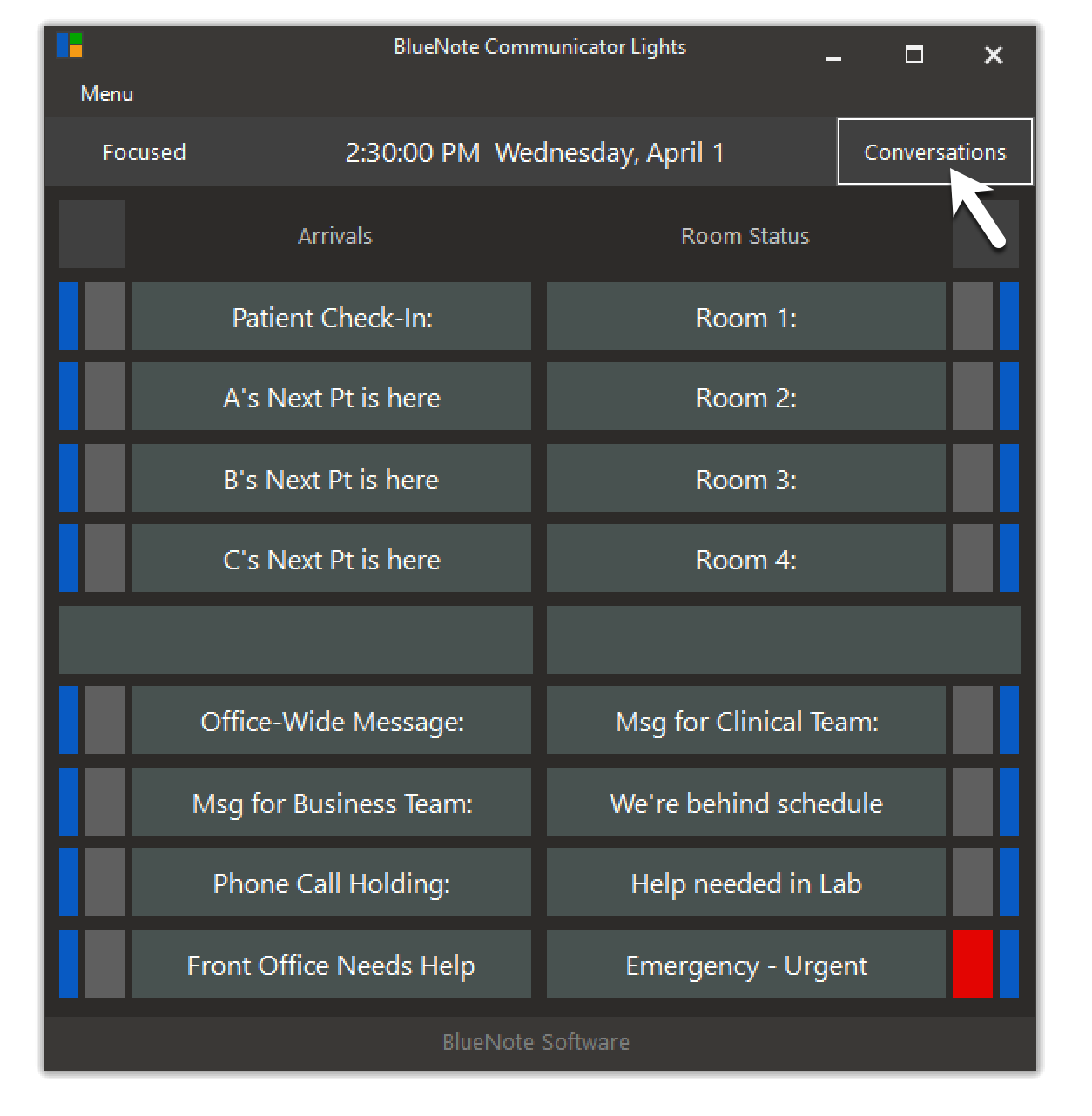 Click on the Conversations button in the upper right-hand corner of the main BlueNote Lights program to open up the Conversations window. If no other users are online, the Users list will be blank or greyed-out. Click on one (or more) user names to start a Conversation, add the message then Send.

Receiving and replying to a Conversation

By default, Conversation recipients will see an entry in their Inbox, as well as a blue popup interruption in the lower right-hand corner of their computer monitor that displays the Conversation. 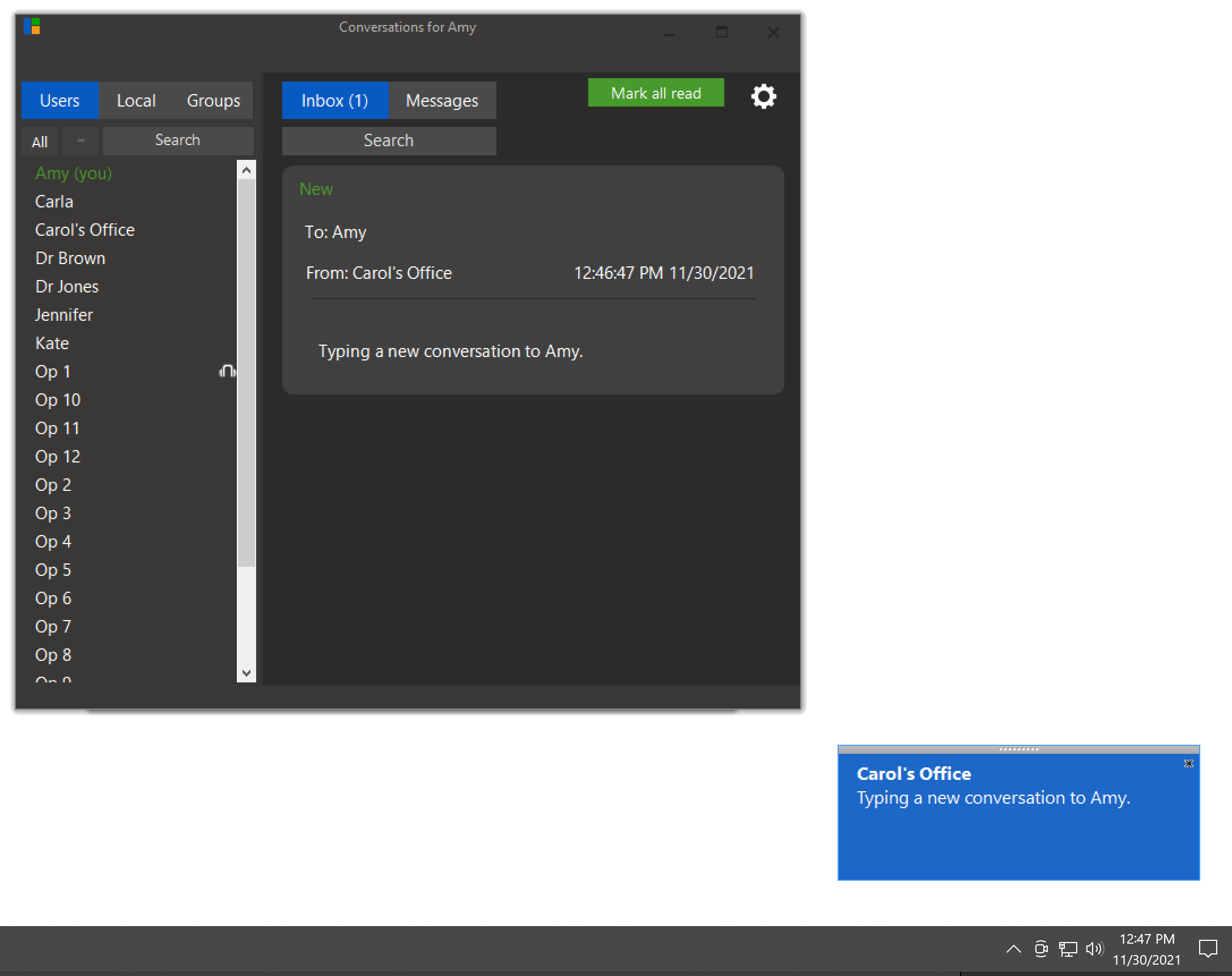 There are two options to open a Conversation:

1. Single-click on the Popup.

The Conversation will open within the main conversations window, where the user may either reply by typing a response, or they may select another option for that message. 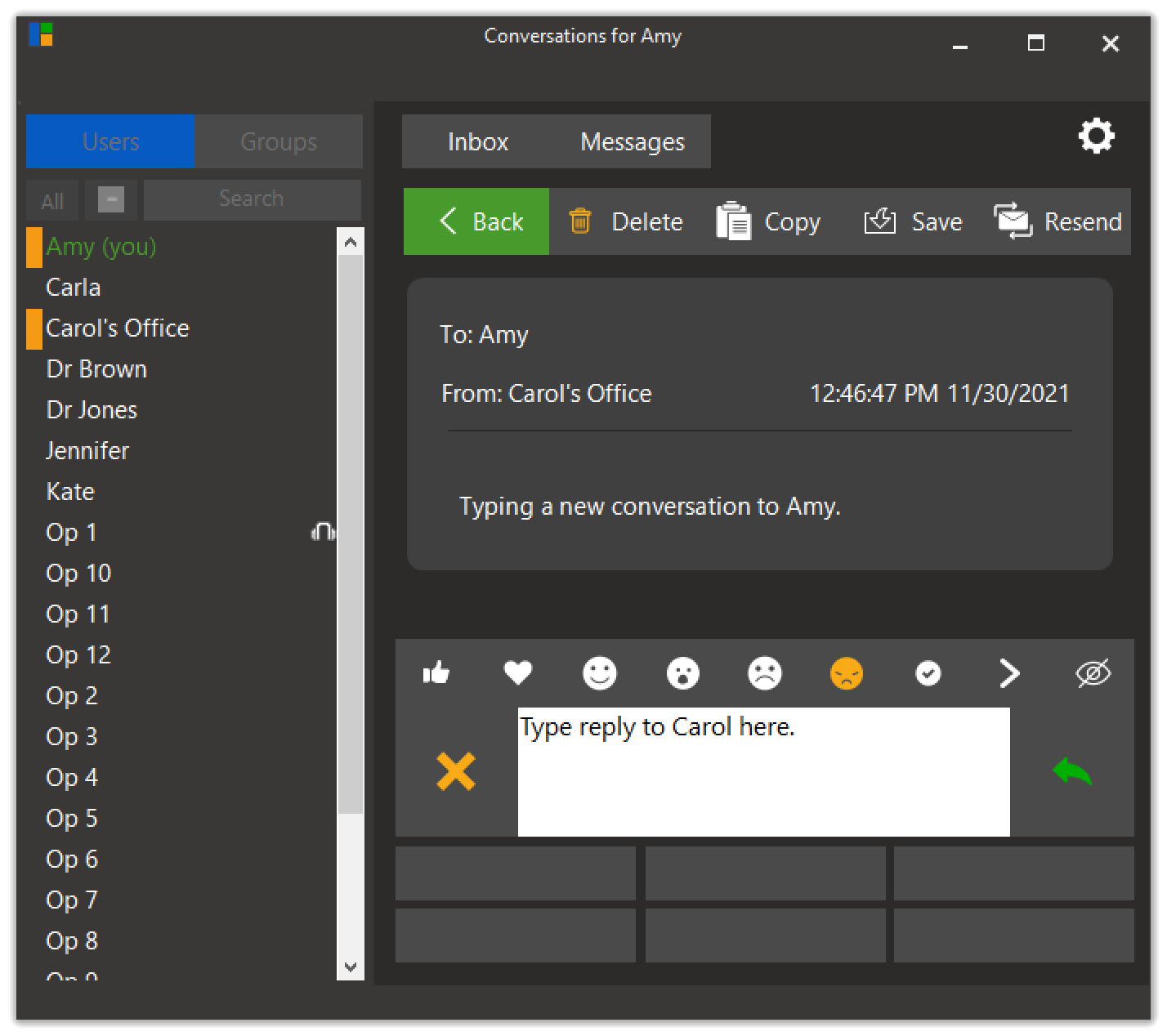 Click the Conversations button on the upper right-hand side of the Light panel to open up the Conversation window.  Then choose one or more BlueNote users by clicking on each User name from the left-hand Users list. Begin typing in the cursor window and press Send to deliver the Conversation. Your recipient will see a pop-up in the lower right-hand corner of their monitor that will stay on their screen for an hour (default). The popup is the indication that a Conversation has been received. You may click on the popup to open the Conversation and then reply to it. All users that are included in the original Conversation will also receive all replies to that Conversation, which is similar to the way that email works.

Think of Conversations as "live email" - this pretty much describes the workflow in the office, especially as it pertains to locating a Conversation that was sent to your computer. 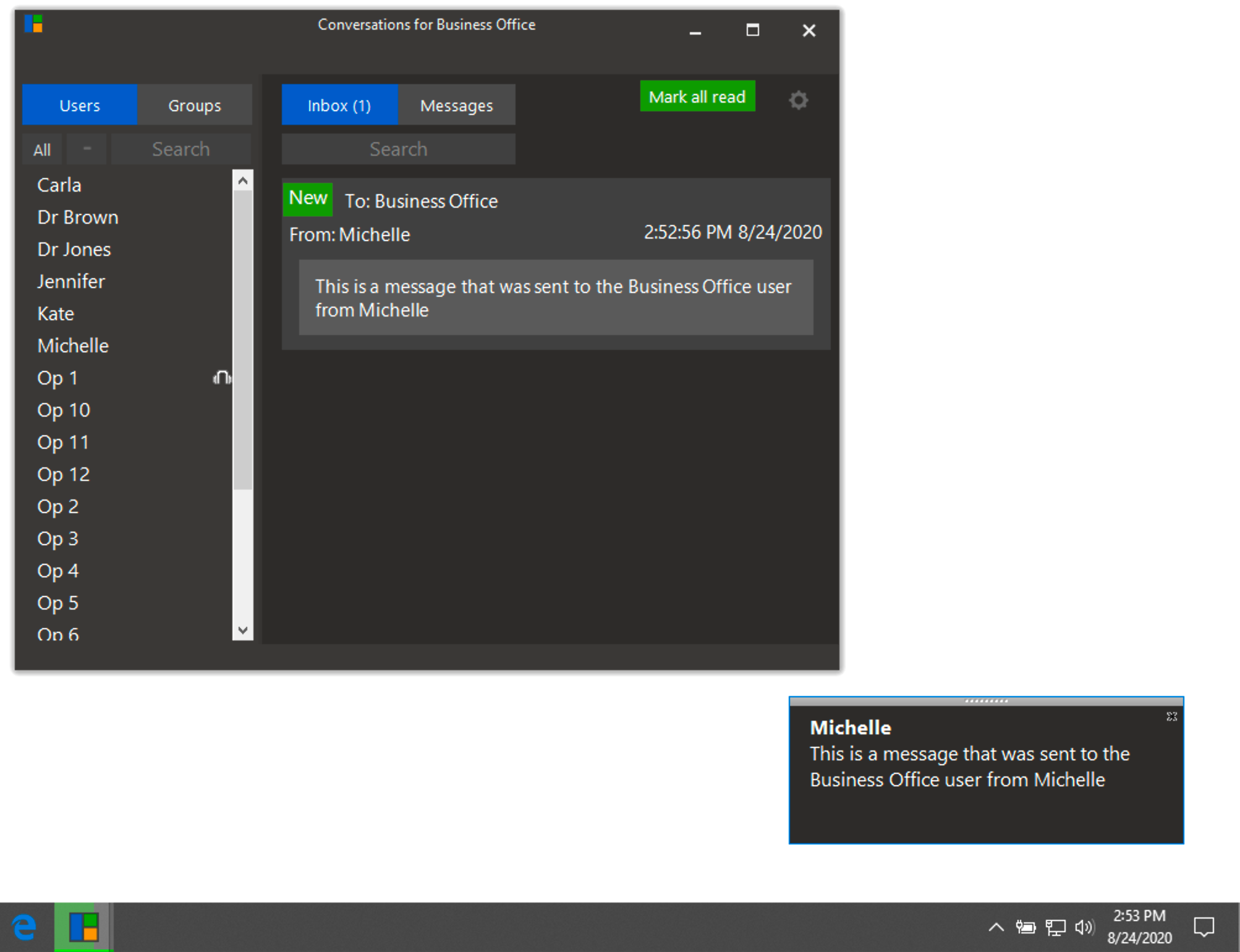 Conversations are separated into two tabs: Inbox and Messages.

Inbox: This tab contains new Conversations or updated message threads sent to this user from other users. Conversations will appear in the Inbox unless they have been clicked on to Respond, Delete, or simply to read. Double-click to open a Conversation and respond to it.

Messages: Any past Conversations will appear in the Messages tab. This tab includes everything that has been clicked on, sent, and all the user's responses.

The user list is also separated into two tabs: Users and Groups.

Users: A list of all online BlueNote users. This list builds itself alphabetically as users come online. Offline users will be greyed out.

Groups: You will not have any Groups set up unless you customize this yourself. Groups are shortcuts that you build within your own BlueNote client to automatically select one or more users instead of having to work from the main user list and continually search for those users that you have Conversations with most often. Click on a blank button or right-click on an existing button in Groups to edit each one.

Choose the Gear symbol within Conversations to make various settings. 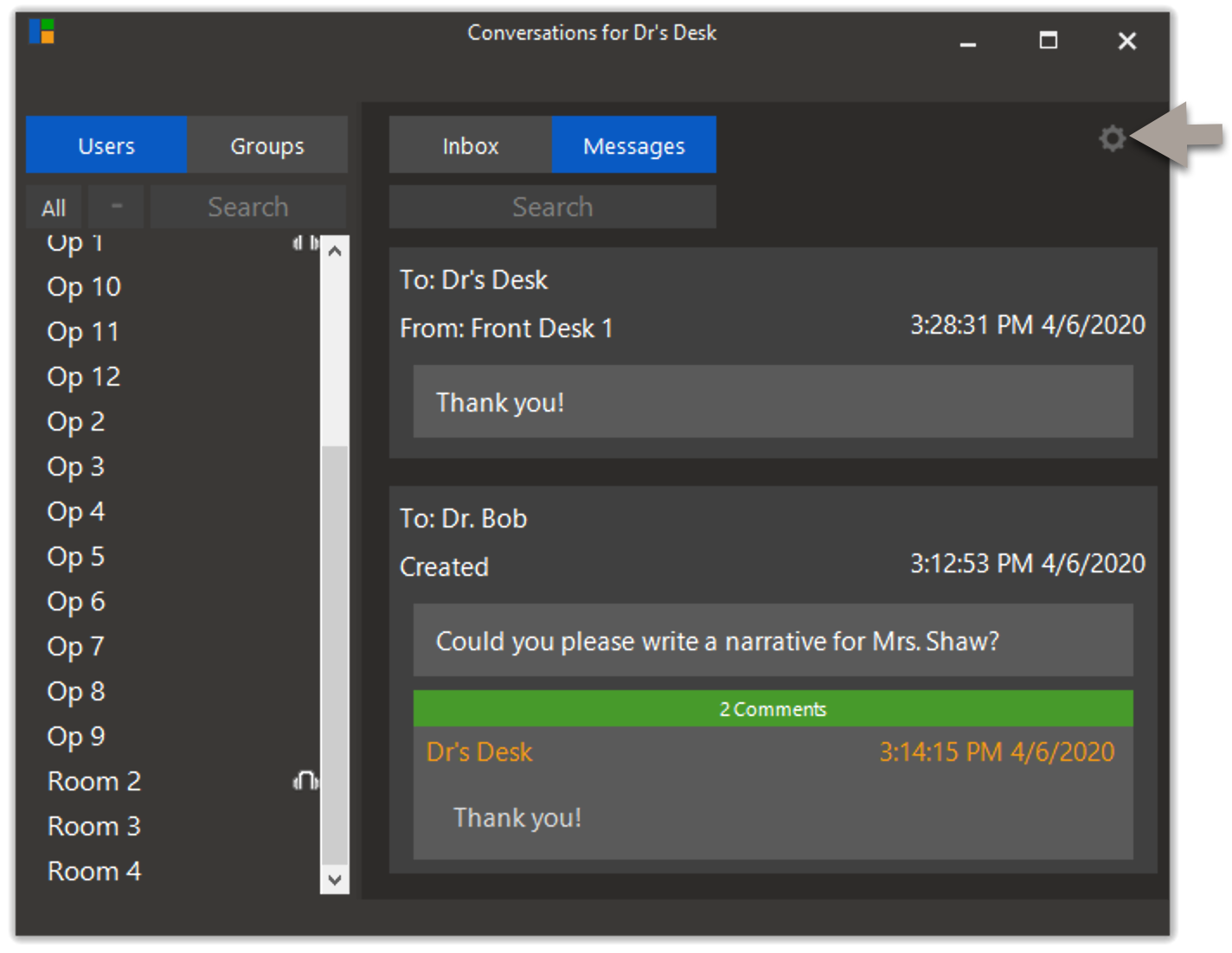